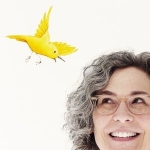 Deborah Freedman was an architect once-upon-a-time, but now she loves to build worlds in books. Her first picture books were tiny and hand-made over twenty years ago for her own children, and her first published book, Scribble, debuted in 2007. Since then, she has written and illustrated Blue Chicken, The Story of Fish & Snail, By Mouse & Frog, and most recently, Shy, This House, Once, and Carl and The Meaning of Life. Her books have been translated into seven different languages, adopted in classrooms across the country, and received many starred and rave reviews, honors, and awards — including SCBWI’s Crystal Kite Award and a Parent's Choice Gold Award.

Lost in books and the arts for as long as she can remember, Deborah majored in art history in college and then went on to study architecture. She is the proud mom of four grown children, an adoring grandma of five, and the devoted guardian of many stuffed animals. When she isn’t making picture books or daydreaming, she likes to plant things and watch them grow, and to wander through museums, libraries, and the woods near her colorful home in Connecticut.

Registration is required for this event. To register, please provide the following information:

Email reminders are sent 48 hours before the event takes place.

If this event is cancelled, we will use the contact information you enter here to get in touch with you.